My wife Ellen and I celebrated our First Anniversary this past Sunday, July 11th.

We did so at B. Smith’s restaurant in Washington, DC. It warms my heart that we’ve spent 3 firsts in black-owned restaurants, a trend I want to continue:

This have been a fantastic year and experience for me and for us. Since last July, we’ve:

Marriage is an everyday thing

Weddings happen once. Marriage is something you participate in every single day. That’s been the best part. Figuring out the day-to-day stuff is less mundane when you have a partner.

Dishes suck when you do them in solitude. Doing them with someone to converse with makes it better than bearable. Plus the self-satisfaction that comes from a well-kept home is knocked out of the park when it’s a team effort. Also, laundry is much easier when the person that hates loading the washer/dryer and the person that hates folding are husband and wife. Compliments attract.

It’s like people take you more seriously. For example, I know that when people see me at age 27 talking about stuff I and/or my wife do, they assume a higher level of maturity and responsibility. It garners more respect.

Not old-fashioned, not new-fashioned: just our-fashioned

We both have our own old-fashioned tendencies. There’s never a circumstance where I’m comfortable with Ellen walking alone after dark. I also like to drive anytime we’re both in the car. Ellen likes proper dinner parties with real place settings. She likes classic, older homes.

We’re kind of new school at times too. I think land lines are a waste of plastic (how’s that for being green :-)) We both dig electronics.

But we too agree on things that others think are crazy. We just cut our cable. Next month we’ll turn in our car and be carless (the 1st time for me since my 16th birthday). We think paper towels are symbols of a bygone era.

None of this is necessarily revolutionary, but it has been an experience in writing our own script. I highly encourage it.

I can’t wait for my next day, month, anniversary. What a year it has been.

I Love You Ellen.

One Love. One II. 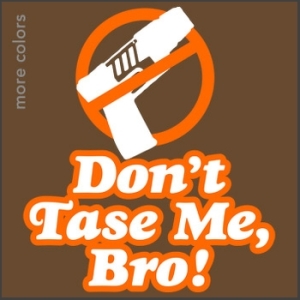 So boom. Justice Clarence Thomas’ nephew was beaten and tased down in New Orleans. Here is how the Washington Post described it,

“Derek Thomas, 25, was immobilized with a stun gun Thursday after he tried to leave the emergency room at West Jefferson Medical Center in Marrero, La., his sister told WDSU, a local television station. Security responded after Thomas refused a doctor’s request to put on a hospital gown and started to leave, Kimberly Thomas said.”

Don’t you just love media framing? A stun gun sounds so innocent doesn’t it? When I hear “stun gun” I think about being wrapped up in a blanket in the winter and getting shocked when I go to turn on the light. However, stun guns are also known as tasers. God forbid Derek Thomas didn’t die from this ordeal but others were not so lucky like Ryan Wilson. (When Ryan took off running, officer John Harris pursued the 22-year-old for a half-mile and then shot him once with an X-26 Taser. Ryan fell to the ground and began to convulse. The officer attempted cardiopulmonary resuscitation, but Ryan died.)

Some would say, “Well, things happen. If you don’t get in trouble, you won’t get tased.” Of course this presupposes some idea of criminal activity right that is simply unfounded. Take Derek Thomas for instance, he didn’t want to put on a hospital gown. That’s what he got tased for? The problem is that tasers are dangerous tools because well-intentioned police will use them in non-life threatening situations using the following logic,

This logic assumes that the weapon used by the police officer will be commensurate to the situation. However, “Ryan is one of nearly 200 people who have died in the last five years after being shot by a Taser stun gun. In June, the U.S. Department of Justice announced that it would review these deaths.”

The issue is not about being soft on crime or aggressive on crime, it’s about making sure we apply our intelligence to the tools we use to fight crime ensuring their use is proportionate to the situation at hand. Surely, we wouldn’t use tanks to bust down people’s doors when a small ram is sufficient (I don’t know the technical term for “ram”).

Nevertheless, imagine if Derek Thomas died from that ordeal. How could his family explain that their loved one died after being tased for refusing to put on a hospital gown? It ain’t right.

So then I thought about this case making its way to the Supreme Court and even though Justice Thomas would have to recuse himself, let’s assume for argument’s sake that he sat for this case and wrote the opinion. (I would be waiting on this opinion like I was waiting on the Mega Millions winning numbers to drop)

I have not read all of Justice Thomas’ opinions but from what I have read, he is almost surely to be in favor not limiting the acts and authority of the police. What do you think his opinion would say? Would you give him praise for realizing the error of widespread taser use or would you give him respect for being consistent to his judicial philosophy despite the personal impact on his family?

I got the photo from here.“Don’t tase me bro” is a popular phrase after a UF student was tased after asking John Kerry some questions. While it has become popular in a joking sense to some, it is not funny at all. I leave you with the video of that ordeal below,

Yesterday’s events will serve as an economic stimulus for barbershops all across America. Yesterday, the cop who killed Oscar Grant was found guilty of involuntary manslaughter and LeBron James decided to sign with Miami Heat. What bothers me though is this idea that really conscious Black people won’t be talking about Mr. James but focus all of their blogs, tweets, status updates, and conversation on raising the level of police brutality.

I submit to you that taking part in LBJ discourse does not mean you have to turn in your conscious card. Can we not walk and chew gum at the same time? Seriously, I feel like part of the reason things seem so dour is that so many debates are about the “agenda” as opposed to making positive contributions (read: action) in your community.

So I am going to do two things. I am going to write about Oscar Grant and LeBron James as proof that Black people can analyze multiple situations at the same time.

The Oscar Grant verdict was tragic because a policeman shot a young man (face down with a knee in his back) with a gun that he thought was his taser. I have issues with tasers as a principle because even if the cop truly believed he was using a taser, they are still extremely dangerous and people can die from being tased. Watch the video below,

The cop was White and the young man was Black but racial concerns aside, how would you feel if Oscar Grant was your son? Let that sink in for a minute? How do you think you and your loved ones would feel toward police after that?

I feel bad for officers and citizens who think most Black people simply hate cops or fail to defend cops when the citizens brutalize them. That is not the case. Like most Black people I am just as mad at the senseless killing of Thor Soderberg, a Chicago policeman as I am at the killing of Oscar Grant. Being a cop is hard and everyday; police put their lives on the line. Trust me, there is no better feeling than calling the cops and they arrive promptly and act professionally. Unfortunately, that is not always the case. Does that mean we swear off cops? No.

However, for many Black people, their trust and sometimes disdain of cops does not stem from a void concept of “I just hate cops.” Instead, many Black people who grew up in urban centers long for a true sense of safety in their community. To put it another way, imagine being in love, like head-over heels, emotionally drowned in love. For many Black people, this is how many of us view being safe in our neighborhoods. We love and long for safety even when we may not experience it . Therefore, when drama goes down and you call on the police for help, their appearance is the physical manifestation of our love for safety. Therefore, when cops use excessive and unnecessary force, the emotional despair and betrayal accompanied with that experience runs deep.

Just talk to any Black man who grew up in the inner city and they will probably be able to relay in vivid detail, a bad experience with a cop that has and will stay with them for years. Therefore, when you hear a Black person say they don’t like cops, they are really describing the severe void of hope they once had in the idea that they could live in safety.

LeBron I think LeBron is a great player but he is not better than Kobe Bryant. Let me repeat, LeBron James is not better than Kobe Bryant. I would have wanted him to stay in Cleveland personally and recruit players to play with him. I don’t agree with Dan Gilbert’s vitriol released after James made his decision talking about curses and dying. However, I do respect loyalty in the way that I appreciate Michael Jordan staying in Chicago, Reggie Miller in Indiana, and Paul Pierce staying in Boston. I do not foresee the Heat winning the championship and if nothing else is true, great teams rely on their stars and their role players. (see Robert Horry, Robert Parish, Bruce Bowen, Derek Fisher, etc.) I don’t see Miami’s bench as fully developed. Nevertheless, LeBron has given up on the chances of being “that guy.” I would go on but Charles Barkley says it all. See the video by clicking here.

See what I mean by walking and chewing gum at the same time?

Update: So I hear that there are riots taking place in Oakland, CA and you know what really grinds my gears? Black people who steal from and destroy Black businesses in the name of extracting justice from White people.

What does it mean to fear the Lord?

Let me first say how much fun Garlin and I had at Blogging While Brown here in DC last weekend. I want to thank Gina McCauley, Shalon Evana, Shawn Williams, Aminah Hannan, Monroe Anderson, Cheryl Contee, Kristal High, and the whole host of participants that have come together to take our collective and individual blogging to the next level.

Today, I wanted to write about spirituality, in particular Proverbs 8:13, which states,

“To fear the LORD is to hate evil; I hate pride and arrogance, evil behavior and perverse speech.”

To be sure, fear used here is not meant in the literal sense but fear in the sense of grave respect. Fearing the Lord is necessary to have a proper relationship with God. I looked at this scripture and looked at it like an equation so what comes (or came) first for you, fearing the Lord or hating evil? For that matter, how do you even define evil? With respect to the latter question of defining evil, I went to Strong’s Concordance Dictionary to understand how the evil was defined in Proverbs 8:13 and the entry for evil follows below, END_OF_DOCUMENT_TOKEN_TO_BE_REPLACED